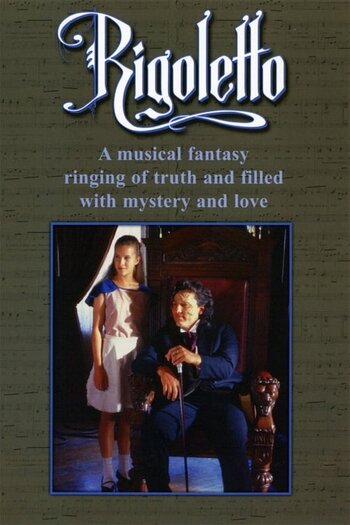 Rigoletto is a 1993 film produced by Feature Films For Families, and tells the story of a young girl who befriends a lonely, disfigured man. When her family faces eviction from their Depression-era home, Bonnie begins working for Mr. Ribaldi in his mansion so that they can stay. Upon the discovery that she can sing, Mr. Ribaldi begins giving her music lessons.

Meanwhile, many in the town are being evicted from their homes and suspect the mysterious Ribaldi. The villagers spread rumors about Ribaldi and most believe that he is a monster. The children of the town, on the other hand, are drawn to Ribaldi. Incidentally, the sick and handicapped people of the village are miraculously healed. Despite this the townspeople threaten to keep Bonnie from singing in the state singing competition unless she stops visiting Ribaldi. Bonnie tells Ribaldi she will not leave him, but he tells her that to abandon the competition would waste all their hard work and insists that Bonnie forget about him and follow her dream.

While Bonnie is singing in the competition, Georgie, a young girl from the village, goes to visit Ribaldi. Along the way home, Georgie falls into a river, and Ribaldi saves her. When he tries to bring her to town, the townspeople attack him, thinking he has hurt her. Afterward they destroy Ribaldi's home in search of evidence that he has been taking their homes and land. Instead of this proof, however, they find lists of people Ribaldi has helped.

Bonnie returns home to find that Ribaldi has died from his injuries. While visiting his house after the funeral, she hears Ribaldi's piano being played and goes inside. There she finds a man who looks like Ribaldi, only without scars. When Bonnie asks him his name, he says "Some people call me Rigoletto, but you don't believe that, do you?" before leaving with Hans and Gabriella. It is implied by this that the curse on Ribaldi, hinted at throughout the film, has been lifted because Bonnie had seen the true beauty of Ribaldi's heart.

The plot is a modified telling of Beauty and the Beast with elements of The Phantom of the Opera. No relation to the opera Rigoletto.