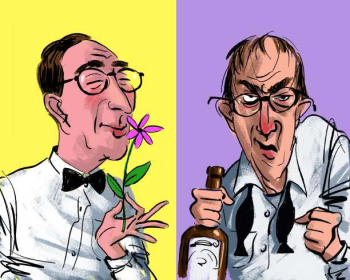 A Latin phrase meaning "The truth in the wine" (or, if you will, "In wine, [there is] truth"). Used in popular media to illustrate what happens when a character consumes alcohol and his true personality emerges. This is Truth in Television to a degree, in that a drunk person has a much harder time keeping secrets and convincingly lying due to alcohol properties as a suppressant inhibiting self-control, but TV Land generally exaggerates it enormously. Symptoms include:

More often than not, this is a quick byproduct of when someone who Can't Hold His Liquor gets ahold of alcohol.

Compare Alcohol-Induced Idiocy (for when booze causes a character's IQ to drop precipitously), Drunken Master (for when booze acts as a Super Serum), Liquid Courage (for when a character suddenly guzzles his bottle or glass dry and pulls off an awesome moment... or just asks the girl out), Mushroom Samba (for when things just get... weird instead), and But Liquor Is Quicker. If the booze-provided honesty gives the character an introspective epiphany, it is Higher Understanding Through Drugs. Compare the implications of Never Gets Drunk. Also, contrast Bottled Heroic Resolve, which overcomes physical limitations; because alcohol is a sedative, in Real Life it acts as anti-Bottled Heroic Resolve. Also, contrast Pink Elephants, which may lead to the truth being ignored because the person was drunk.

See also What You Are in the Dark. May result in What Did I Do Last Night?.

Shay reveals what she really thinks of everyone at OPHS while drunk enough to make her mother blush.

Shay reveals what she really thinks of everyone at OPHS while drunk enough to make her mother blush.