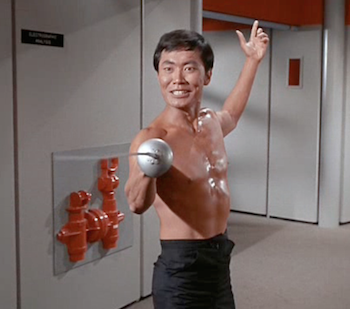 The Enterprise has arrived at the ice planet Psi 2000 to document its impending collapse. Spock and some other loser beam down in environmental suits to investigate why a laboratory on the planet shows no life signs: turns out, everybody froze to death because someone left the door open and nobody cared enough to correct that. While Spock is investigating the corpses, his companion unwisely removes his glove to scratch his nose, allowing a strange red fluid to drip onto his hand.

Back on board the Enterprise, the Red Shirt starts acting strangely, in turns belligerent and depressed. He gets into a fight with Sulu and a guy named Lt. Kevin Thomas Riley, brandishes a dinner knife at them, and mildly injures himself. However, when McCoy operates on him, he dies, seemingly losing his will to live. McCoy is perplexed, as the victim was in good health and was previously known as a strong-willed individual. The reason for his odd behavior soon becomes apparent: he carried a disease that removes inhibitions (and makes one extremely sweaty, incidentally).

Chaos engulfs the ship as the disease spreads: crew members act carelessly, laughing maniacs run around the halls painting creepy messages in red paint, Sulu menaces passersby with a fencing sword, and Spock enters a crippling depression. Worst of all, Riley has locked himself in the engine room, hijacking the PA system to make bizarre announcements and advise women on hair and makeup styles, stranding the ship just as the planet is breaking up, threatening the Enterprise. Kirk and Scotty try to break into the engine room while McCoy cooks up an antidote. However, by the time Scotty gets the door open, it's revealed that the engines were stopped completely and that restarting them would take more time than they have. Desperate, Kirk orders Scotty to... do something involving matter/antimatter annihilation to get the Enterprise out of the way. Scotty cries that it only has a 1-in-10,000 chance of not blowing them to smithereens (so, naturally, it will work perfectly), but he needs Spock's help. Kirk tries to slap Spock out of his funk, but Spock only recovers when Kirk empathizes with him under the disease's influence and reveals the heavy burden of being Captain of the Enterprise—contrary to popular belief, you can never get laid, at least not with crew members. McCoy cures the crew and the ship escapes, but with a strange side-effect: it travels about three days backwards in time, in the series' first instance of time travel.

TNG ripped off simply revisited this scenario in "The Naked Now." ...just revisited.