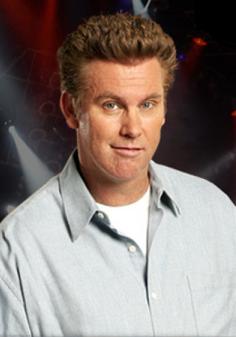 Brian Joseph Regan (born June, 2, 1958) is an American stand-up comedian. He's known for his consistently clean comedy style; he generally stays away from off-color humor and profanity. He bases all of his humor on common everyday occurrences such as ironing boards and buying juice. So what's so funny about this, you ask? See for yourself!

He does a lot of material about his childhood and his own (often unfortunate) experiences at typically normal places such as the emergency room and the airport.

His stand-up specials have included Stupid in School, You Too And Stuff, Comedy Central Presents: Brian Regan, I Walked On The Moon, Standing Up, The Epitome of Hyperbole, All By Myself, and Nunchucks and Flamethrowers.. He's also performed on Late Night With David Letterman and Late Night With Conan O'Brien, and also made an appearance on Game Grumps as a guest.