What Do You Mean, It's for Kids? 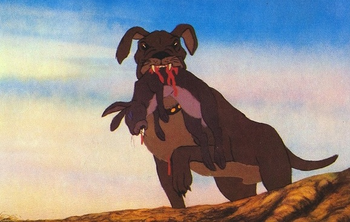 For kids age six and up.
"Our future society is desperately bloodthirsty. When they fight, you see people just foaming at the mouth out of excitement at the destruction. It's a kid's movie!"
— Bayer and Snider, Movie B.S. on Real Steel
Advertisement:

Often times, productions that are marketed to children make us wonder if they were created for them, because of potentially explicit content, serious and mature plots or both. Namely, if these shows have an awful lot of Parental Bonus, Parent Service, and the like. Unfortunately, this can also bring Moral Guardians out of the woodwork if it seems to be blatant enough. This can also happen when something is given a G rating but has an awful lot of potentially explicit content.

This phenomenon can also occur due to Values Dissonance. For example, Once Acceptable Targets are, by definition, no longer acceptable, and Real Life tragedies can make things Harsher in Hindsight, and different countries' Moral Guardians have different standards. There's also the fact that, in the past, the line between "child" and "adult" wasn't always drawn at the same age as it is now, and children weren't always expected to be shielded by default from the horrible realities of the world around them.

Another reason for this trope is that a good number of children are quite fond of scary or violent things, and are often too young to understand the reasons many of these stories are considered dark. Often confused with What Do You Mean, It's Not for Kids?, where a work is commonly mistaken as being for kids even when it is not. When played for laughs, see Demographically Inappropriate Humour.

Another major reason for this reaction is that the core cast of the work in question are animals instead of humans. It has been noted with many examples listed here that despite having the similar mature themes along with the presence of blood and violence, whether the cast is human or animal often solely determines whether it gets shelved to the young adult or children's section respectively in bookstores and libraries.