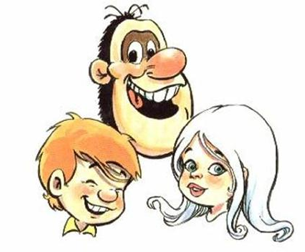 From left to right: Mampato, Ogú, and Rena.
Advertisement:

Las Aventuras de Ogú, Mampato y Rena ("The Adventures of Ogú, Mampato and Rena"), also known as Las Aventuras de Mampato or simply Mampato, is a Chilean Comic Book series originally created by Eduardo Armstrong and Óscar Vega (also known as "Oskar"), but quickly passed over to Themo Lobos, who would write and draw it for the great majority of its run, giving it its signature style. It's one of the two most well-known and acclaimed Chilean works of the medium, the other being Condorito.

The basic premise goes like this: Mampato is a normal, middle-class, Chilean boy. One day, he saves an alien stranded on Earth named Xseturlzzn (or simply "Xsé"), who takes him to Xsé's home planet, Xagus. After Mampato helps him stop the evil Mong's plan to conquer the planet, Xsé and the people of Xagus give Mong's "space-time belt" to Mampato as a thank-you present.

Mampato, who has a great interest in history, uses the belt to travel to various places and time periods, which include the prehistoric era, the Middle Ages, the Chilean Independence War period, and even the far-off future, with the ability to return to the exact time and period he came from allowing him to avoid suspicions from his family. Since it's more of an Edutainment series (though it doesn't mean it's realistic or 100% accurate), less focus is given to the effects of Time Travel and more is given to the places, and characters Mampato meets along the way (which range from historical figures to original characters, with characters from myth here and there, such as King Arthur).

The comic ran for the entire duration of the Chilean magazine Mampato; that is, from 1968 to 1978; political tensions in the country affected the comics industry, forcing the magazine to be Cut Short. Lobos would fund a new magazine in 1986 called Cucalón, which collected all the works made by him until that moment (including Mampato), finishing its run in 1993.

While the comic will likely never be recontinued (as all the creators involved have passed away), it has been republished several times. In 2002, it received an animated film adaptation, Ogú and Mampato in Rapa Nui (based on the seventh book Mata-ki-te-rangui note The reason for this particular book to be chosen being that it was set in the world-renowned Easter Island, pretty much the only Chilean place the rest of the world knows.). The movie is considered the first "modern" Chilean animated film (the first being La Transmisión del Mando Presidencial, made in 1921).