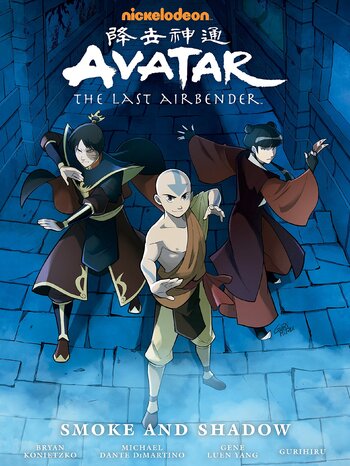 The fourth comic trilogy in the Avatar franchise. In addition to following up on previous trilogies, it is also a sequel to the Free Comic Book Day 2013 issue, Rebound.

Having found his mother at the end of The Search, Zuko is eager to bring her and her new family back to the Fire Nation and show her how much it has changed. However, in his absence, things have continued changing, and for the worse: a group named the New Ozai Society is campaigning to discredit Zuko for his weakness and absenteeism and restore Ozai to the throne. Furthermore, beings called Kemurikage, mysterious figures thought only to exist in legend, take an interest in the rebellion and do so by abducting children much like the legends of old. Meanwhile, Mai seems to have found a new boyfriend, tearing up old wounds between himself and Mai...

Smoke and Shadow's first book happens concurrently with the previous trilogy, The Rift.

Followed by Avatar: The Last Airbender – North and South.

Smoke and Shadow provides examples of: