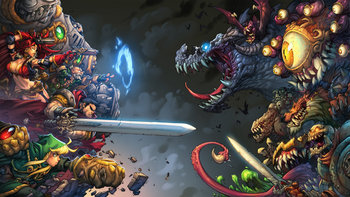 Five individuals were brought together by fate, which in this instance, is defined by accidentally releasing a multitude of that world's most heinous evildoers, and they end up becoming a most unlikely and reluctant band of heroes. The team consists of Gully, daughter of the legendary warrior Aramus; Garrison, a cynical master swordman and warrior; Knolan, an ancient sarcastic wizard; Calibretto, a "War Golem;" and Red Monika, voluptuous female rogue and leader of a band of airship pirates.

During its initial run, the series was somewhat of a big deal, reaching #14 on the Top 300 Comics list due to having strikingly wide appeal and the quality of its story and characters, to the point where movie rights for a film version were even purchased for a big screen adaptation. Today however, the series is more well-known as a punchline for Madureira's infamous lateness and for late comics in general, which, if you know the details of its release schedule, you can see why (Basically, Madureira produced a total of nine issues in four years, publishing two to three a year. Most other comics, in comparison, usually release an issue every month). The ninth issue, published in September 2001, had a cliffhanger-ending that was never concluded. Joe Madureira left the industry to pursue a career in video games, serving as creative director for Darksiders and Darksiders II.

A video game adaptation based on the comic, titled Battle Chasers: Nightwar, would later show up on Kickstarter. Developed by Airship Syndicate, a developer co-founded by Madureira following Vigil Games shutting down, managed to hit its funding goal in two days with Madureira claiming he would also continue the comic series from where it left off. The game is a turn-based RPG, heavily inspired by games like Chrono Trigger and Final Fantasy.