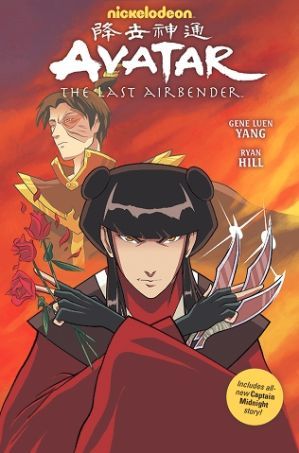 Another installment in the Interquel comics set between the series Avatar: The Last Airbender and The Legend of Korra and part of the overall Avatar universe. Written by Gene Luen Yang, it was released on May 4, 2013 (Free Comic Book Day) and takes place either in-between or alongside the plots of The Promise and The Search. It was later reprinted alongside the other Avatar Free Comic Book Day specials and several new stories as part of the anthology Team Avatar Tales.
Advertisement:

The story follows Mai after she left her boyfriend Fire Lord Zuko in The Promise when she grew fed up with him continuing to keep her in the dark about things, especially his secret meetings with his imprisoned father. She's gotten a job in her aunt's flower shop but still misses Zuko. When a customer asks her out on a date, she accepts, hoping the change of pace will cheer her up.

Mai's date takes her to what turns out be an underground meeting of the New Ozai Society, a faction of Ozai loyalists led by Mai's father, the former Governor of Omashu/New Ozai, plotting to overthrow "the usurper" Zuko and restore the proper Fire Lord to the throne. Her father wants Mai to join them and tell them anything she can about Zuko that might help them overthrow him.

Mai, however, is not pleased with her father's schemes and even less pleased that he's brought her baby brother Tom-Tom to this place to be properly taught his duty to his nation. Mai declines her father's invitation and fights her way out past the other members, taking her brother with her.

Avatar: The Last Airbender - Smoke and Shadow continues both Mai and the New Ozai Society's story.