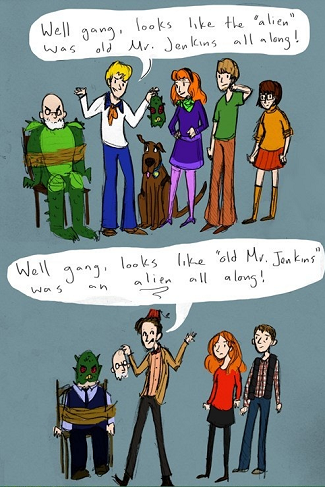 Mystery Incorporated and the Doctor dealing with the trope in different ways. Art by samdraws

The characters investigate a site with reported paranormal or other activity. By the end of the episode, they discover that the supposed supernatural activity or monster activity is nothing but an elaborate hoax taking advantage of local lore to frighten off the curious from discovering and interfering with their main criminal activity. Or just to mess with people. Locals are typically too scared to take a closer look, and if the police aren't fooled themselves, they've already written off the whole thing as a juvenile prank not worth their time. Thus, it's up to those intrepid meddling kids to uncover the truth.

In the old days, this apparently really worked. Smugglers and other criminals could scare away intruders by dressing as ghosts. Nowadays, however, this would be a really stupid ploy, as many alleged real life haunted houses and areas of "paranormal activity" are tourist attractions. The criminals wouldn't be able to move for New Agers, UFOlogists, people from shows like Ghost Hunters, James Randi fans, and other rubberneckers. Plus, those local cops would probably be far more attentive about "strange goings-on at the old lumbermill" (though they're probably thinking 'meth lab' over 'costumed jewel thieves'.) On the other hand, the aversion - pretending that a place is haunted to attract public attention & make money on "haunted" fame - tends to work really well.

This trope crops up a lot in works aimed at children, especially ones from the mid-20th Century. It allows the creator to play with some mild horror tropes in children's entertainment without irritating the Moral Guardians or introducing the supernatural to a real-life setting. Sometimes the Hoax revolves around the application of one scientific fact or theatrical technique, for a valuable educational lesson.

The most common subversion is for all — or some — of it to prove Real After All or at least of uncertain origin. Indeed, the investigators may discover the truth and haul the instigators off to jail, and the audience alone gets to see the unambiguous and real apparition. Or they may get to see the real thing along with the characters.

This can be a real source of frustration to fans of Speculative Fiction, who tend to be drawn to certain works specifically because of the paranormal elements.

One of the major exceptions to Skepticism Failure. See also Monster Protection Racket, where the monsters are real but they're being set up, and Monster Façade, where the monster is real, but it fakes the malevolence. The Inversion of a "Scooby-Doo" Hoax is Mistaken for an Imposter. For the good counterpart, see Scarecrow Solution.

Because the existence of a "Scooby-Doo" Hoax tends to remain secret from the audience until the ending and belie earlier assumptions, mere presence on this list can be considered a spoiler.