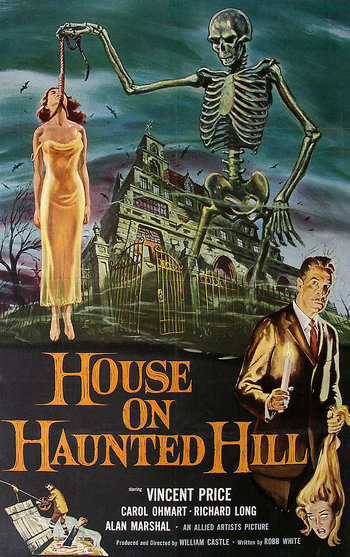 "I am Frederick Loren, and I have rented the house on Haunted Hill tonight so that my wife can give a party. A haunted house party. She's so amusing. There'll be food and drink and ghosts, and perhaps even a few murders. You're all invited. If any of you will spend the next twelve hours in this house, I will give you each ten thousand dollars, or your next of kin in case you don't survive. Ah, but here come our other guests."
Advertisement:

House on Haunted Hill is a low-budget 1959 horror film directed by William Castle, regarding five people who have been invited to stay the night in a Haunted House.

Eccentric millionaire Frederick Loren (Vincent Price) is throwing his "party" for his fourth wife, Annabelle, with the stipulation that the power will be out and all doors will be locked at midnight, allowing no accessible escape. Anyone who survives the night will be awarded $10,000. As the night progresses, however, it becomes clear that this is no game by the host — the partygoers are indeed trapped here with malevolent ghosts, murderers, and other terrors.

Matching up with William Castle's Signature Style, the film originally released exhibiting one of his past-the-fourth-wall gimmicks — in this case, a model skeleton would be elevated over the movie audience during the climactic scene, and would then be reeled back during the shot of Loren winding its thread back into the reel (which is why this shot seems to go on a bit too long without the gimmick).

The film was remade forty years later by Dark Castle Entertainment. It's also in the Public Domain, and can be viewed and/or downloaded legally for free online. The film was "officially" released to DVD in 1999 from Warner Home Video, and Blu-ray in 2014 from Shout! Factory as a part of their second Vincent Price collection.