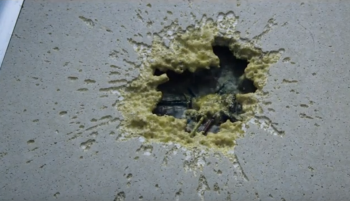 In films, on TV, and in comic books, an "acid" is any liquid that can eat away at and completely dissolve skin and muscle, leaving only bone and sometimes not even that. Even stronger "acids" will dissolve steel, glass, plastic (even though it's nearly impossible for plastic to be dissolved by an acid), concrete, and ultimately everything it comes into contact with... except whatever container it is stored in. Such liquids are almost always either a bright green or sickly yellow color. They bubble and fizz on the counter or floor when you spill them, give off visible, smoky fumes (which never seem to be harmful in their own right* Don't Try This at Home. Fumes are perhaps the most dangerous thing about real world acids, since they're hard to contain, and don't tend to get along with the lungs.), and they never dissipate. If a drop of acid eats through the floor, it will continue to eat through things on the next level down, and so on. There are even some video games where puddles of this stuff can move around and try to kill you.
Advertisement:

This stuff will usually be referred to as either "acid," "toxic waste," "poison," or simply "chemicals," unless it's given some highly scientific name at its introduction, after which it will simply be called one of the names above. Don't expect to ever see bases used in the same role as acids, despite being equally dangerous in reality (perhaps they just don't sound as cool). If it's glowing rather than giving off fumes, you're probably looking at Hollywood Radioactive Goo, which will otherwise behave exactly the same. Expect it to show up at least once in any work involving a Mad Scientist. If this stuff is ever spilled on a person or other living creature, say hello to the Nightmare Fuel.

A subtrope of Hollywood Science. Compare Acid Attack, Poison Is Corrosive and Acid Pool (when this is applied to a Death Trap). Has nothing to do with those other kinds of acid. Compare Blazing Inferno Hellfire Sauce, which is almost always Played for Laughs.

Dr Neurosis' gardens have lots of green acid that has the same consistency as water and will melt Lance to the bone in an instant should he fall in.

Dr Neurosis' gardens have lots of green acid that has the same consistency as water and will melt Lance to the bone in an instant should he fall in.