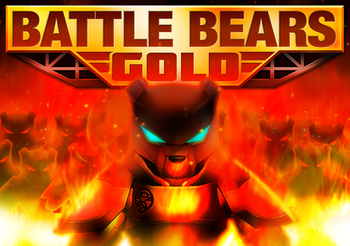 Battle Bears Gold is a Third-Person Shooter developed by SkyVu.

It was released on June 3rd, 2013 for both iOS and Android.
Advertisement:

The game focuses around two teams of bears fighting to the death in an online arena. Players are placed into a random map of the gametype they choose. There are 11 classes to choose from, each with their own weapons, skins, and abilities. Furthermore, one can take up to three different loadouts into battle.