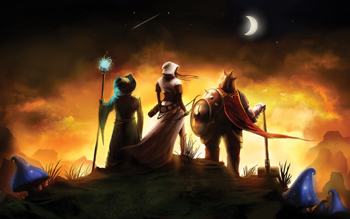 From left to right: Amadeus, Zoya and Pontius
"By my trousers, I must escape!"
—Amadeus, at the start of the game
Advertisement:

Trine is a 2009 Puzzle Platformer developed by Frozen Byte and published by Atlus. It features gameplay similar to the old classic The Lost Vikings mixed with the physics challenges of LittleBigPlanet, with three characters who all have different powers and gameplay mechanics. The levels are mostly linear, but exploring them thoroughly will yield rewards in the form of treasure (which gives you special enhancements) and experience vials (which let you level up your skills).

Three characters, opposed by an undead horde, each find themselves meeting face to face over an ancient artifact called the Trine. Their souls are sucked into the device, and they become merged into one body (or up to three bodies in co-op play).

A sequel, Trine 2, was released in 2011, revolving around a new threat that the three heroes must unite together to face. The game received an expansion, Goblin Menace, in early 2012. In mid-2014, Frozenbyte ported the original game to the sequel's engine and released it as Trine: Enchanted Edition, a free update for PC owners and set to be released on two eighth generation consoles, the Wii U and the PlayStation 4.

On March 2, 2015, Frozenbyte announced that Trine 3: The Artifacts of Power

was planned for a 2015 release. On April 21 of the same year, the game was released on Steam Early Access, and given a full release on August 20.

Nine Parchments, a spin-off set in the same universe, was release on 2017.

Trine 4: The Nightmare Prince was released in 2019.

Now with a Characters page, please add tropes regarding them there.