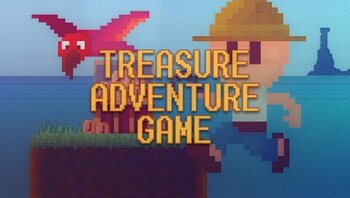 Treasure Adventure Game is a freeware sidescrolling Metroidvania / Zelda-style game with a pirate / nautical theme; in it, your character has to search for treasure maps, then use them to sail the two-dimensional seas to various islands to search for long-lost treasure.

In ancient times, the world's landmass was lumped together into one continent. The people of that continent lived peacefully until one day an evil demon invaded and threatened to destroy the world. A hero by the name of Huayin, traveled the continent to search for 12 magical artifacts that he used to battle and defeat the demon, the battle causing the continent to split apart into the world as we know it today. Centuries later, two friends named Gagwin and Baggus have been traveling the globe, accompanied by Gagwin's son, and manage to find all 12 artifacts once again. The trio lands on the island where a mystical temple is held, which can only be opened if one has all of the artifacts, and leads to great riches. The trio enters the temple...and the flashback ends.

Cut to the present day, where a boy lives on a nearby island with an old woman he calls his grandmother. For his birthday, she gives him a boat that he can ride in and travel to other islands, and tells him how she found him washed up on shore years ago wrapped in a map. The map leads the boy to a museum that Baggus has built, and learns about the 3 essentials of adventuring, meets a talking parrot, and is then told about the 12 artifacts which Baggus has built the museum to exhibit. Baggus asks the boy to retrieve the artifacts once more.

. Very little is known about it at this time, but it is known that it is gonna be published by Chucklefish, the creators of Starbound.