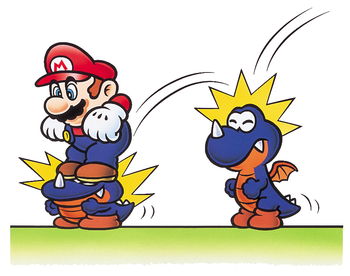 And 32 pixels from a height discharged is bad for a Rex with a hitbox enlarged.
"Cripes! I wish life was like those video games where all you had to do to defeat the bad guy was jump on him!"
— Jazz Jackrabbitnote Accompanied by a Sonic the Hedgehog expy who threatens to sue, no less.
Advertisement:

No matter how much Collision Damage they can dish out, the enemies in almost any Platform Game seem to be vulnerable to people jumping on top of them and cannot inflict damage when touched there. It's effective against any creature in the game, except for that one foe with spikes on its head that has to be defeated in another manner. And if you can land that hit, you can probably use them as a Goomba Springboard. Mario was the pioneer, and then all other platformers jumped on the bandwagon.

Consider the average man weighs about ninety kilos/two hundred pounds (body, clothes and equipment all included); having that much weight suddenly land on your head would be enough to knock most people (let alone squishy mushroom critters) out cold. The biggest problems are getting high enough above a person to execute the stomp and not hurting yourself while landing, but fictional Jump Physics make those trivial.

This attack is commonly abbreviated to just 'stomping', but differs from the real world Finishing Stomp in that the latter involves forcibly bringing down one's foot on an already-downed opponent, whereas this technique simply has you apply your whole body weight to the target through both feet.

Anime & Manga
Comic Books
Fan Works
Films — Live-Action
Live-Action TV
Pinballs
Pro Wrestling
Tabletop Games
Web Animation
Webcomics
Cranky Kong: You kids have it easy! When I was your age, jumping on top of monsters was a surefire way to get yourself killed! Your only options were to grab some weapon or just get out of the way. Monsters are far too squishy nowadays!
Feedback

The troper namer, and one of the most common ways to deal with enemies in the entire Super Mario Bros franchise

Alternative Title(s): Jump On Its Head

The troper namer, and one of the most common ways to deal with enemies in the entire Super Mario Bros franchise