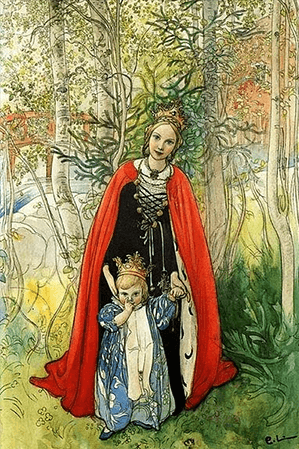 Nothing like a cute child to make a Happy Ending even happier.
"A woman giving birth to a child has pain because her time has come; but when her baby is born she forgets the anguish because of her joy that a child is born into the world."
— John 16:21, The Bible
Advertisement:

Sometimes you have a Happily Ever After situation, but it just isn't heartwarming enough. Maybe the marriage happened earlier in the season; perhaps the couple was already betrothed but weren't able to consummate the union. Perhaps you need some Dénouement to confirm that, yes, really, it really was happy. Maybe the Bittersweet Ending is short on "sweet". Or, maybe, you just want to make things as adorable as possible. The answer? Skip ahead a bit to show the Happily Married couple...and their adorable new baby. Awwwww!

Or, if we cut to the future, show them at home with their growing children. Generally a whole brood, as a mundane equivalent to Fertile Feet, or demonstrating that Mordor has No Ontological Inertia. The older the children, obviously the more years have passed in peace, proving more of the "Ever After" part of the happy ending. Grow Old with Me in an epilogue may feature grandchildren, or even great-grandchildren. (See also Hope Sprouts Eternal.) If the ending is not Cleaning Up Romantic Loose Ends, unmatched friends often appear in the role of Honorary Uncle; conversely, Weddings for Everyone may result in loads of underfoot children. And expect the newborns to be named after dead friends or teammates who had made Heroic Sacrifices during the course of the story, clearing the path for the heroes' victory at the cost of their own lives.

It seems that the Law of Inverse Fertility gets inverted once you get past the climax. Even if one or both were confirmed as sterile — such is The Power of Love. The likelihood of this increases exponentially every time one or both people say they don't want to have a kid, or express reluctance to. (Makes many parents very happy.)

The Bittersweet Ending often shows a Dead Guy Junior in this situation. Her Heart Will Go On may entail the discovery that she is pregnant after the father is dead: he's gone, but he's left her Someone to Remember Him By.

If the couple had a child early in the story, perhaps resulting in a Shotgun Wedding, this may result in a younger brother or sister.

Might involve a Screaming Birth, but this is, of course, optional; the baby itself is what makes this trope run, so the cuter the better.

Sequels to works with these sort of endings often make the kids into major characters.

The rationale for this trope is related to Babies Make Everything Better. Compare Birth/Death Juxtaposition. Not to be confused with Wave of Babies.

Naturally, this is an Ending Trope, so unmarked spoilers ahoy!

Blu and Jewel are seen with three chicks during the end credits song Real In Rio. After all, that was the point of them getting together as they were brought together to help save their species, the Spix's Macaw.

Blu and Jewel are seen with three chicks during the end credits song Real In Rio. After all, that was the point of them getting together as they were brought together to help save their species, the Spix's Macaw.