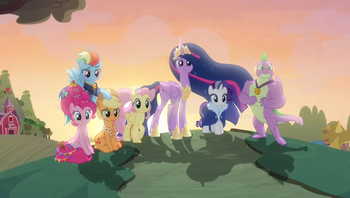 And the greatest spell you'll know
is how the Magic of Friendship grows.
"Ever since I took over Celestia's school, my focus has been on teaching magic. But now it seems my top student has missed the most important lesson of all."
— Future Twilight Sparkle
Written by Josh Haber
Advertisement:

As Spike returns to Canterlot to report to Princess Twilight Sparkle with his negotiations of peace between the Abyssinians and the Diamond Dogs, Twilight's student, Luster Dawn arrives to talk to her. Luster explains that she's appreciated all the lessons Twilight has given her, but doesn't understand the whole deal with the importance of friendship, given that she's never seen Twilight with any of her old friends since her coronation. Twilight is bemused and goes on to explain what actually happened then and since...

In a flashback, Twilight and Spike are preparing to move from her castle to Canterlot. Twilight is feeling the magnitude of the change, which is not helped by when Spike feels he doesn't need to take his comics with him. Just then, her friends arrive, all explaining what's in store for her at the coronation: Rarity is anxiously finishing her gown with the help of enchanted spiders, Rainbow Dash has the Wonderbolts practicing a special routine, Applejack is making sure the right apple products are delivered correctly to the banquet, Fluttershy has to make sure the royal swans and ducks are ready to help in the ceremony, and Pinkie Pie is worried that Gummy may not set off the fireworks properly. Twilight starts to realize that the others all seem to want to rush her to the coronation, the last time they will be together, and worries about how their friendships will last after she moves away and takes on her new responsibilities.

Briefly in her story, Twilight reveals this was only a hiccup to Luster Dawn. Back in the flashback, her friends apologize for making her feel rushed, but with all their discussion, they realize that Twilight is missing the train to Canterlot. They race to the station, knocking over Starlight Glimmer as she was about to give Twilight a going-away present. At the station, they're too late for the train. Twilight teleports them all onto the train, but this makes them have to improvise their duties, notably with Big Mac having to take over the deliveries to Canterlot and getting them mixed up. Rainbow also tries to catch up to the Wonderbolts to find they've already left for Canterlot.

Rarity races the spiders to finish the last part of Twilight's gown, inadvertently getting the spiders caught in it, as the ceremony starts. Princesses Celestia and Luna introduce Twilight, and transition their rule to her by fusing their crowns into one. Just then, the Wonderbols start their routine before Rainbow can stop them, Gummy sets off the fireworks too early, and Fluttershy, seeing things going off ahead of schedule, has the swans and ducks perform their routine — however, as they near Twilight, they panic at the sight of Rarity's spiders, and between the birds and fireworks, the Wonderbolts stumble through their routine, and inadvertently knock Twilight off the balcony — though she is able to fly back up, looking very much worse for wear. At the banquet, Bic Mac's mishandling of the orders means everypony is drinking applesauce instead of apple cider. Twilight realizes how badly the ceremony has gone.

In the present, Luster Dawn wonders if all those screwups were why Twilight doesn't see her friends anymore. Twilight quickly corrects her: after the banquet, they all apologized to Twilight for the mistakes but she admits it made the whole ordeal more interesting and glad they are her friends. Celestia and Luna come to say their final goodbyes before they head off to Silver Shoals, assured the kingdom is in good hooves. Starlight finally catches up to Twilight and gives her the gift: a book with moving pictures of all the memories Twilight had in Ponyville. Twilight comes up with the idea of having a Friendship Council, where despite them all going their own ways, they can each meet once a moon to catch up with each other as well as keeping her abreast of how everything is going in the kingdom.

Twilight reveals to Luster Dawn that today is the Friendship Council meeting, and one-by-one her friends arrive: Pinkie Pie, now married to Cheese Sandwich and having to watch over her son Li'l Cheese, Rarity who has just opened a new boutique in Yakyakistan, Rainbow Dash, who is now in charge of the Wonderbolts, Applejack, who has taken over the duties at Sweet Apple Acres, and Fluttershy, who continues to run her sanctuary with help from Discord. Luster is amazed they are all here and didn't realize how important friendship was to Twilight. Twilight decides that Luster Dawn should experience more friendship for herself, and teleports her and the other Mane Six to Ponyville, where they show Luster Dawn around the town and the Friendship School which now has a much more diverse population of species. Satisfied that learning about friendship is the right way to go, Luster Dawn joins other students at the school while Princess Twilight Sparkle and the others look on. The scene ends as a picture in the same book that led off the show, and closing with the melody of the show's theme song.

Twilight is preparing to move back to Canterlot as part of her ascension to ruler of Equestria, and has to cope with it.

Example of:
Moving Away Ending

Twilight is preparing to move back to Canterlot as part of her ascension to ruler of Equestria, and has to cope with it.