Literature / The Exile of the Sons of Uisnech 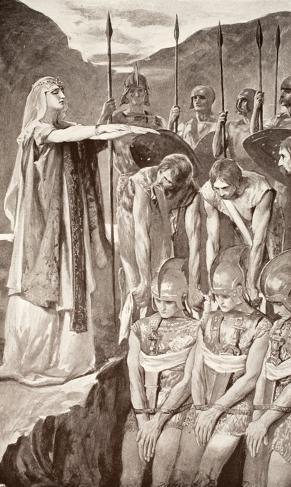 The Exile of the Sons of Uisliú, or Deirdre and Naoise, is a story of the Ulster Cycle of Irish mythology, written down in the Middle Ages but set in the Celtic pagan Iron Age. King Conchobar of Ulster locks Deirdre away in a tower from birth, due to a prophecy that she would be incredibly beautiful and men would fight over her. Deirdre is the daughter of Conchobar's poet, but she grows up with foster parents and out of sight of all boys, so she doesn't fall for anyone else before Conchobar marries her. But, well, a pretty warrior-singer called Naoise ruins all that, and Deirdre persuades him to elope with her, incurring the wrath of Conchobar. Naoise's loyal brothers, Ardan and Ainnle, come along for the ride and they all end up in Scotland, where they live simply and happily for a while... Until Conchobar pretends all is forgiven and invites them home, precipitating a brutal, tragic ending. And the outraged exile of Fergus Mac Róich, which will be important later...

Alternative Title(s): Deirdre Of The Sorrows