Literature / The Children of Tuireann 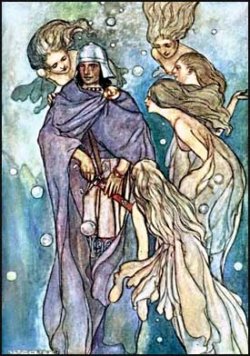 Brian mac Tuireann and the Women of Fincara (Stephen Reid, 1910)
“If any man should willfully slay my father, it is not in one hour or in one day I would have him put to death; but I would lop off one of his limbs each day, till I saw him die in torment under my hands!”
Advertisement:

The Fate of the Children of Tuireann (also known by at least half a dozen different title variants) is an Irish legendary romance, part of the Mythological Cycle of Irish Mythology.

During the second reign of Nuada of the Silver Hand as High King of Ireland, Ireland is oppressed by the Fomor who extort high taxes from the Tuatha Dé Danann. When Lugh of the Long Hand, chief commander of the Tuatha Dé Danann armies, slaughters the tax-collectors of the Fomor, the Fomor mount a punitive expedition.

Lugh's father Cian, son of Cainte, assists his son in rallying the Tuatha Dé to defense. It is on this mission that he runs into the three sons of Tuireann: Brian, Iuchar and Iucharba — mortal enemies of the sons of Cainte. The encounter ends with the death of Cian at the hands of the brothers.

The Fomor are repelled, but Lugh notices that his father is missing. Discovering Cian's body, he guesses the identity of the killers. In the middle of the victory celebrations, Lugh confronts the sons of Tuireann. Brian refuses to confess, but agrees they will pay the blood-fine for Cian — believing they will come out easy in this way.

But Lugh is not so easily appeased. To pay for the death of Cian, he sends the three brothers on a quest to retrieve seven powerful magical objects from all the corners of the world and bring them back to Ireland, so they will help the Tuatha Dé Danann in their coming showdown with the Fomor. With no choice to refuse, the sons of Tuireann set out on a mission against all odds that will lead them to Greece, Persia, and even more exotic places — but can the task be fulfilled at all?

Tropes in The Children of Tuireann:

Alternative Title(s): The Sons Of Tuirenn