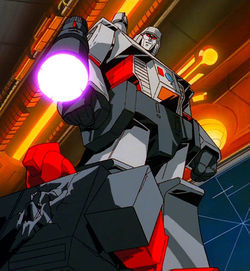 "Such heroic nonsense..."
But I can't shake the feeling something happened back there, when the battle was already over. That something was done while my back was turned...
And if it was? I didn't hear any savage barking or tearing. Is a killer still a killer if death comes as a mercy?
— Lucky, Survivor Dogs
Advertisement:

After someone attacks a location, there will usually be one or two wounded people left lying on the floor writhing in pain (sometimes begging for mercy, depending on how tough they are). The attacker will then dispatch them with a single shot, or any kind of One-Hit Kill, to the head. This is often done one-handed to emphasize how casually the villain is performing his little clean-up job.

If pronounced after the French manner, the term is pronounced "coo deh graass" and translates as "blow of mercy". However, most English speakers hypercorrect the pronunciation so the last word is pronounced "grah", which in French changes the meaning to "blow of fat". (However, since we're speaking English and not French, it's a bit of a moot point.) It comes from the use of such execution methods as the "Breaking Wheel", often used in France during the Dark Ages, where the victim would be stretched across a wheel and tortured by nonfatal hammer blows that would break bones but not cause death — the executioner would usually be ordered to end the victim's pain with a strike to the chest.

Also used in assassinations. In Russia, this is known as a "control shot". It can be done by all stripes of characters, and often spy characters, either to ensure a kill has succeeded or to make sure a Big Bad is indeed dead. Not to be confused with actions such as a "Double Tap" in which multiple bullets are fired during the initial action; these are additional killing shots (or blows) delivered at some point after the target is disabled.

If it's done to ensure a swift and painless death, see Mercy Kill. Part of the Coup de Grâce Cutscene. May be used as (part of) a Finishing Move. See also Finishing Stomp and Double Tap.

Compare with Sickbed Slaying, Sitting Duck, and Slain in Their Sleep. Contrast with Finish Him! and Thwarted Coup de Grâce.