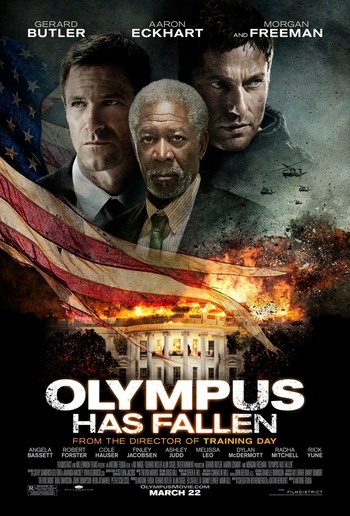 When our flag falls, our nation will rise.
"It takes fifteen minutes for your armed forces to reach the White House. We took it down in thirteen."
— Kang
Advertisement:

Because Kratos just wrecked the entirety of-- wait, wrong media.

Secret Service agent Mike Banning (Butler) is distressed when he fails to rescue the first lady during a snow storm. More than a year later, he takes it upon himself to rescue the President of the United States (Eckhart) and the country after the White House is taken over by Korean terrorists bent on revenge.

A sequel, London Has Fallen, was released in 2016, which was followed by a third film, Angel Has Fallen, in 2019. A fourth film, Night Has Fallen, has been announced

The direct competitor to White House Down. Compare and contrast it.

Olympus Has Fallen contains examples of: