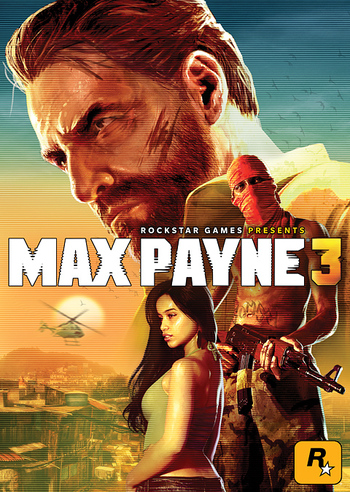 Max Payne 3 is a Third-Person Shooter video game, developed by Rockstar Games and released in May 2012. It is the third and final game in the Max Payne series.

Eight years after the end of Max Payne 2, the game finds Max, still unable to get over the death of his wife and child, continuing to drown his sorrows with painkillers and booze in Hoboken, New Jersey. Approached by academy buddy Raul Passos, Max is offered a fresh start as a private security guard for the wealthy Branco family in São Paulo, Brazil. Unfortunately, he hardly gets started when a band of favela Gangbangers try to kidnap patriarch Rodrigo, before successfully capturing and ransoming the employer's young wife, requiring Max to set out to get her back. However, things get complicated fast by paramilitary extremists hostile to both sides, and what's the deal with the infamously Brutal Military Police special forces? As things go From Bad to Worse, Max has to kick his addictions, sober up, and pick up the thread before it's too late for his charge. It was heavily inspired by Man on Fire.