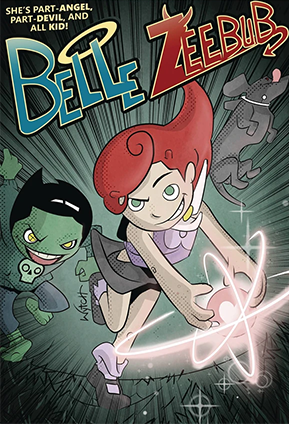 Just like how the trope Alucard deals with people named (or naming themselves) after Dracula, this is about people with a name similar to the devil. Maybe the literal Devil has taken a personal interest, or maybe it's just a high-level demon or an Agent of General Badness, whatever the local badness happens to be called. In any case, it's powerful, it's bad, and it's one of the Names to Run Away from Really Fast!

Be very wary of guys named "Lou", "Luke", "Lukas", or "Lucius", particularly if their last name is Siffer or Cypher or something like that. Remember to keep an ear open for Milton (author of Paradise Lost) and Morgenstern (German for "morning star"; but be careful with this one, "morning star" is also a title for Jesusnote I Jesus have sent mine angel to testify unto you these things in the churches. I am the root and the offspring of David, and the bright and morning star. (Rev. 22:16)). Also take a careful look at the ones named "Nick", "Scratch", "Deuce", "Thorn" or some variant thereon, and definitely don't trust any President whose name is Nixon (which, apart from the obvious, also sounds exactly like "Nick's son"). In certain cases, don't trust women named "Lucy" or "Georgia". You should also be on the lookout for anyone with a two-syllable name starting with "S" and ending with "N." Apparently the Devil's not very good at choosing aliases, despite having a huge variety to pick from. Or maybe it just shows his opinion of the hero's intelligence level. Or, it could just be ego.

Bonus points if his address or phone number is prefixed 666.

Sub-Trope to Devil in Disguise.

Common in Deal with the Devil stories. See also Sdrawkcab Name and Alucard. Related to Most Definitely Not a Villain. If God Is Evil, Louis Cypher may be a Steven Ulysses Perhero.

This is often a reveal trope, so spoilers ahoy!