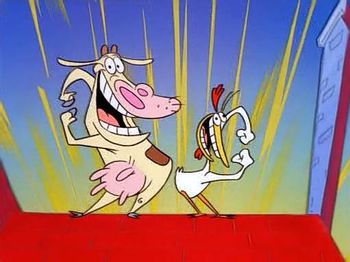 Running from July 1997 to July 1999 on Cartoon Network, the series reveled in the Rule of Funny, filled to brim with Black Comedy, surrealism and a sense of humour that appealed to its grownup audience just as much as to the kids watching it. Cow and Chicken (both voiced by Charlie Adler) typically spend their days having adventures in their neighbourhood, going to school, getting into trouble with their cousin Boneless Chicken (also voiced by Charlie Adler) and being pestered by a guy from Hell known as the Red Guy (Charlie A-oh, you know the drill).

Their extended family consists of Snail Boy, a snail; Cousin Black Sheep, a sheep whose nice gestures and intellectual talk is construed as nasty; Cousin Boneless, a boneless chicken; and Sow, an evil pig. They also have an uncle Longhorn Steer, who appears in "Professor Longhorn Steer". The episode "Happy Meat" also showed the ghosts of a pair of Cow and Chicken's ancestors, a male (human) farmer married to a female chicken. Friends and close associates include Chicken's two buds Flem and Earl, and a loud and obnoxious school teacher.

Initially, the show included a Three Shorts format with two Cow and Chicken episodes and one of I Am Weasel, another series by Feiss. Later on, I Am Weasel was spun off into its own series shortly before Cow and Chicken's run ended.

Though the show ended in 1999, the title characters were still frequently featured in advertising for the network. In addition, Chicken ended up being one of the most prominent non-host characters for the Cartoon Cartoon Fridays bumpers.

Many years after the end of the show's run, Cow and Chicken made a memorable cameo appearance

The Manure the Bear Show

Cow and Chicken watch the theme song for Manure the Bear (a spoof of Winnie the Pooh). The lyrics appear on screen for the audience to sing along, with a weenie in place of a bouncing ball.

The Manure the Bear Show

Cow and Chicken watch the theme song for Manure the Bear (a spoof of Winnie the Pooh). The lyrics appear on screen for the audience to sing along, with a weenie in place of a bouncing ball.