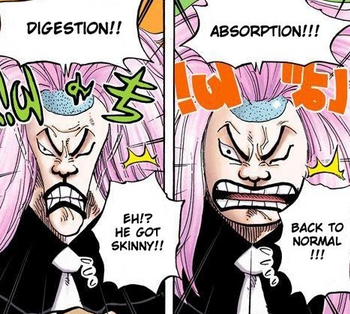 "Now, now, I'm sure it's nothing to worry about... although such a rapid weight loss in such a short space of time is most unusual."
— Doctor, Robotboy, "Tummy Trouble"
Advertisement:

In western animation and anime, you can have a character whose size can moderately or drastically change for just a few minutes as the scene calls it, or even for the whole episode. Characters may either gain weight, lose weight, grow muscles, or be inflated with air or liquid according to the script. However, when the scene or episode ends, the affected character will usually be back at their regular size as if nothing ever happened.

While this can be caused by magic, superpowers or science, it can also be caused by something that can realistically change someone's size. Even if this is the case, though, it'll likely happen at an unrealistically quick pace. Seldom will a character experience health issues from either the change to or the reversion from the new size, and if this temporary size is bigger than their normal size, they'll never suffer from excess skin, even if they lose the weight in an instant.

When used over the course of an episode, it may be an element of A Weighty Aesop. Shorter-term instances may be used for sight gags or fat jokes.

Rarely used in live-action television and/or film since the actor often has to wear heavy padding and special make-up, which is expensive and makes them very uncomfortable.

Not to be confused with Your Size May Vary, where stylistic change may make someone merely seem larger or smaller without necessarily changing bulk. Contrast Sizeshifter, Incredible Shrinking Man or Attack of the 50-Foot Whatever. Compare Balloon Belly. The Heavy Voice is sometimes a side-effect of this trope.