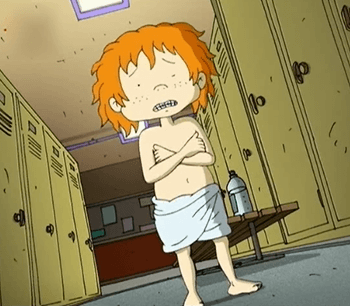 "Bobby, no one wants to take a shower after gym. It's not fun, it's not pleasant, and usually not very sanitary, but you do it anyway. Why? Because a big part of being a man is doing things you don't want to do. But there's a way to get through it: You just lower your eyes to the floor and count the tiles."
— Hank Hill, King of the Hill ("The Incredible Hank")
Advertisement:

A character, usually male, has to get into a group shower for the first time, but finds the idea of getting naked in front of others uncomfortable. He will often try to avoid having to take a shower using various excuses, before finally summoning up the courage to go through with it, realizing he has no reason to be ashamed.

This trope is mostly found in series set in a school, where the character is a student who has to shower with his classmates after PE. Adolescent kids are often going through puberty and enduring the Appearance Angst that comes with it, so being naked in front of their peers understandably cranks those insecurities to extremes. It also inflicts Trans Tribulations on anybody with dysphoria.

Although group showers are the most common example, it can also apply to other places where people are usually naked, like during a Public Bathhouse Scene.

Truth in Television for many people, of course.