Lions and Tigers and Humans... Oh, My! 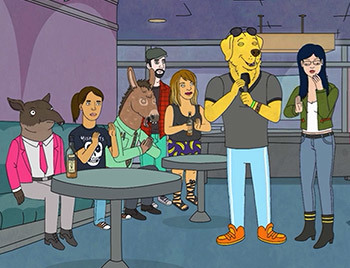 Teacher: So the first Little Pig went to the store. He asked the merchant, 'I'd like to buy some straw please.' And what do you think the man said?
Student: He said, "Holy shit, a talking pig!"
— Story from an old email meme
Advertisement:

Funny Animals are handy. Because they're animals that act human without looking human, they can add a sense of whimsy or comedy to a piece; seeing a group of animals go about ordinary human lives can help to accentuate just how absurd we are sometimes. If they're played with "realistic" animal traits (or as realistic as circumstances allow), they can allow for a unique brand of comedy. If they're being used seriously, they can help give the impression of a different world. Heck, they might just be easier to draw. However, in many works that use them, they are a "human substitute." It might get a little too weird to consider what it would be like having both humanoid "animals" and "ordinary" humans running around in the same world—especially if there are regular animals running around as well, and even more so if some of them talk!

Some writers couldn't care less, however. And thus you get worlds where pointy-hatted young women buy their groceries from six-foot-tall raccoon dogs, little girls go on play dates with grizzly bears, preteen kids go to school with monkeys, and plenty of other assorted hijinks go down between humans and what most people consider "furries." To make things even more baffling, some of these worlds have ordinary Talking Animals as well, generally making everyone's heads hurt. And... don't bother asking what everyone eats. Seriously... just don't.

If the cast is mostly human, expect the talking animals or anthropomorphic animals to be an Unusually Uninteresting Sight. If the cast of a work is mostly composed of animals, a human may be thrown in as the furry equivalent of a Token Minority. And if the Funny Animals in question are very small and typically go unnoticed by humans, it's a Mouse World. And when the entire setting is made of funny animals instead, see World of Funny Animals.