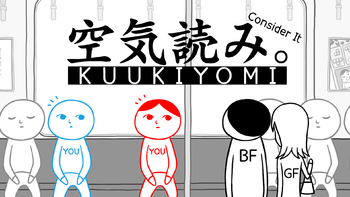 Kuukiyomi ('Reading the Situation') is a series of games developed by G-Mode. Each game is a collection of minigames that require the player to read the situation and react accordingly. Basically, this is a differently-paced WarioWare game.

The first few games were released only in Japan:

The series then took a break for some years before returning on the Nintendo Switch. These games are the first to be translated into English.