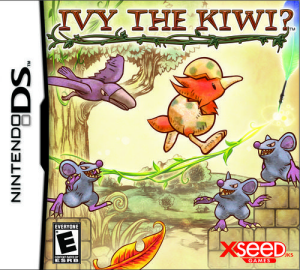 Ivy the Kiwi? is a 2010 Platform Game for the Nintendo DS and the Wii, designed by Yuji Naka, developed by his studio, Prope, and published by XSEED Games. In 2012, it was ported to iOS devices as well.

You play as Ivy, a newborn bird (presumably a kiwi, but the question mark in the title makes one wonder) who has been separated from her mother. Ivy is not controlled directly; instead the player must create ramps, slingshots, roadblocks and the like out of vines for her using the stylus or remote.

This game plays very much like a throwback to the golden years of gaming, with very little plot and straightforward 2D platforming gameplay.