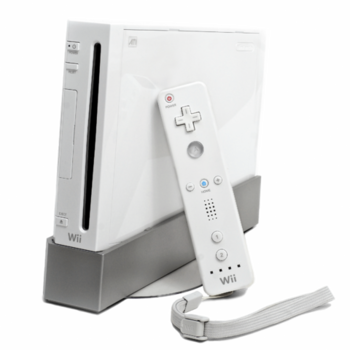 "Two GameCubes duct taped together" = Seventh best-selling console of all time.
"Wii Would Like to Play."
—Tagline, English commercials

for the Nintendo Wii
Advertisement:

Many Japanese third-party developers dumped Nintendo for Sony following the Nintendo 64, and many gamers thought Nintendo would concentrate on their handheld dominion or even go third-party like former console makers Sega, Hudson Soft, Atari and SNK. Things were this dire. In the escalating cost of superior graphics in the Console Wars between Sony and Microsoft, it was thought that Nintendo couldn't compete. In response, they created an innovative, family-friendly, durable console. This time though, they would not be dead last. Meet the Nintendo Wii, Nintendo's fifth console released in 2006.

Nintendo focused on an innovative, motion-based control scheme involving the Wii Remote, or the Fan Nickname "Wiimote," a controller which can best be described as a fusion between an NES controller and a television remote control, that could sense both the button presses and motion-based movements of the person holding it. This lowered the difficulty curve immensely. Usually, a beginning gamer would have to not only to learn how to control their character, but also learn how to control their controller: "'Hold X to perform action?' What's performing an action? What's X? Do I have to hug him? And how do I made him doesn't afraid of anything?" ...Okay, maybe we're exaggerating it a little bit. But maybe we're not. Compare this to the ease of using of a remote control, and you can see why the Wii Remote was such a clever step.

The Wii also focused on a low price point (approximately US$199 in Japan with no game, and roughly US$249.99 elsewhere when bundled with Wii Sports), countering the escalating price tags on its competitors. They did this by cutting out many features that the other consoles took for granted (DVD and CD playback,note the console can still read and play video DVDs on model 1 units, but the feature is closed off without modding due to the high costs of royalties and the fact that Sony co-owned the rights to both the CD and DVD formats; whether or not the Wii can play CDs with modding hasn't been adequately determined, though most sources point to it not being possible high-definition support, and built-in ethernet capabilities) that weren't that important to the gaming experience. Nintendo then marketed the console as "for the whole family," and to further this, made it look as sleek as an iPod, with an (initially) white color scheme to boot.

Much to the surprise of the gaming press, doubters, and nay-sayers, It sold well. Ludicrously well. The Wii's crushing marketing victory, Day 1 profitability, and unprecedented sales numbers make it the most successful console of its generation.note As of the end of March 2013 it has sold about 100 million units, compare 78 million for the Xbox 360 and 75-78 million for the PlayStation 3. From its launch until late 2008— a period of two years— the Wii was constantly backordered across retailers everywhere, along with everyone and their grandparents (quite literally) getting their hands on one. It worked so well that 4 years later, all hypocrisy broke loose and both Sony and Microsoft came up with copies of the Wii Remote and Nunchuk, namely the Kinect and PlayStation Move, right after having their marketing team call it a useless gimmick meant for "casual gamers".

Plus, it did it all without needing specs that raised the cost of the system (which, following Japan's "Lost Decade"

of economic instability, they could not have afforded regardless). Much of the Wii's internals were based off the GameCube,note Gearbox Software president Randy Pitchford even referred to the Wii as a "supercharged GameCube"

in an Electronic Gaming Monthly interview; and Chris Hecker of Maxis infamously called it "two GameCubes duct-taped together" at the 2007 Game Developers Conference an already pretty powerful piece of hardware (for its time), but made even more powerful. It had numerous fundamental differences to the PS3 and 360. The make a good analogy comparing the systems is that the Xbox 360 and PS3 are modern, top-of-the-line supercars, while the Wii is a tuned-up roadster from a decade ago, modified to yield higher horsepower. ex: The Wii had no internal hard drive for the sake of cost and reliability. It also lacked programmable pixel shaders, restricting it to simplistic, vertex-based shaders that could not be modified to yield higher resolution. Becoming obsolete with the arrival of Microsoft's Direct X 8 (used in the Xbox) and OpenGL 2. Simply put, in terms of shaders, the Wii and its competitors spoke completely different languages.

Nintendo's first true foray into internet-based play started on the Wiiex: the company toyed with the concept a few years earlier with select DS titles and, much like the console itself, were a far cry from the other systems. These included the infamous friend code system that would be phased out in later generations in favor of more traditional usernames. The Wii did have a surprisingly deep online store like its competitors, and a separate Virtual Console store that essentially served as legal emulation. Unfortunately, it was not possible to download normal games, just smaller WiiWare ones, and patching wasn't feasible. Additionally, a true mass storage solution (like, say, an external hard drive) didn't appear until the end of March 2009, and only a limited number of demo versions of the games were available.

Sadly, in the case of third-parties, most developers would either ignore the system entirely, or toss in some quick-and-dirty ports of PlayStation 2 games (coupled with half-baked controls), with more serious efforts coming only after the system's continued popularity established it as a friendly environment. The low development costs compared to its HD cousins allowed for many unusual, financially risky games, often critical darlings but commercial failures. A common debate involving the Wii is whether a real-time strategy game slash life sim where the protagonist is a little boy or a spiritual successor to an equally cult PS2 beat 'em up would have done well on any other system. The lower development costs also meant the system ended up hosting large amounts of shovelware. The newfound audience of casual players didn't know any better, being more susceptible to buying cheaply-made games with motion controls slapped on. However, it would still see third-party successes such as Sonic Colors, LEGO Star Wars: The Complete Saga (while not an exclusive, it sold the best on the Wii), Monster Hunter 3 (Tri), Tatsunoko vs. Capcom, and most notably, No More Heroes.

However, despite cries of "inferior" graphics and processing power, the Wii continued to sell better or as good as the other systems, depending on whether there was a recent Killer App release, with the Virtual Console being used as a way to offer re-releases of older games as effective stopgaps. Much of the early analysis of the console's inevitable failure comes across as It Will Never Catch On mentality in light of its overall success, and the occasional April Fool's joke about the Wii being highly successful

is now Hilarious in Hindsight.

Nintendo was engaged in a constant cat-and-mouse game with hackers over the Wii firmware since launch. Frequent system updates during the Wii's lifetime include patches to close loopholes known to be exploited by hackers, though Nintendo ultimately threw in the towel at the end, especially with Super Smash Bros. Brawl having an unpatchable hacking entry point within its Level Editornote Nintendo did patch this on the Wii U's Wii mode by checking SD cards for specific files when loading Brawl in the Wii Menu. Of course, you can avoid this by...inserting the SD Card after the game has loaded. This lead to a proliferation of emulators and applications to load Wii and GameCube games off an external hard drive, as well as game mods developed during and after the Wii's life that are loaded through the SD card slot such as Project M (A Brawl mod to make it play more like Melee), CTGP Revolution (A custom track pack for Mario Kart Wii) and Newer Super Mario Bros. Wii (a fan-made expansion pack for New Super Mario Bros. Wii).

It is also possible to play DVDs on specific model 1 units (the ones with GameCube support) through unauthorized means. Nintendo has players believe the Wii would require a hardware upgrade because movie playback wears out the system's DVD drive very quickly. They're probably not lying — technically, the Wii has very little memory and storage space for buffering, so in order to avert Loads and Loads of Loading, it compensates by spinning the disc really, really fast for prolonged periods of time. This has an unfortunate tendency to shorten the lifespan of the optical drive quite significantly.

In 2011, Nintendo revised the Wii, releasing the Family Edition (with various colors coming with different pack-in games). While the same size and shape as the original, the GameCube ports were removed as a cost-saving measure, thus removing backward compatibility support and the ability to use GameCube controllers for games like Super Smash Bros. Brawl, Mario Kart Wii and GoldenEye 007.

It's a cute little console, but to make it smaller (and cheaper), Nintendo cut out its network functionality as well as GameCube backwards compatibility and the SD card slot. This consequently removed practically all entry points for hackers to softmod the Wii Mini, though an exploit within its Bluetooth stack was eventually discovered

Though as with any popular Defunct Online Video Game and with the console cracked wide open by that point, the Wi-Fi shutdown hasn't deterred the modders as they have established the Wiimmfi

It should never be confused with, or thought of as, a Wii-Wii. Trust us, the fans (and Nintendo themselves) surely don't.

The Wii provides examples of: