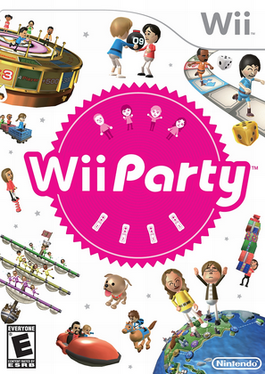 A Party Game for the Wii, released in July 2010 in Japan and October 2010 elsewhere, Wii Party is a descendant of the Mario Party games with Miis in place of Super Mario Bros. characters. Its modes include a couple of Board Games, a Wheel of Fortune-like game show mode, Bingo, a version of hide and seek, and some longer puzzle games, among others.
Advertisement:

A sequel, Wii Party U, was released for the Wii U on October 25, 2013. The sequel introduces a variety of new modes, many of which are designed to take advantage of the unique features of the Wii U Gamepad.