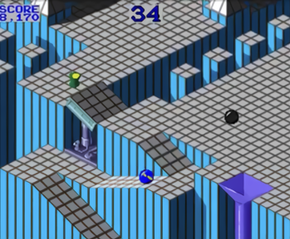 A common gameplay element (or, often, a game's whole premise) involving rolling some sort of sphere from the beginning of a level to the end. The player might be pushing the ball around, inside the ball, running atop the ball, or tilting the level to control the ball.

Many wooden mechanical versions of this game exist, generally having a pair of knobs to manipulate the angle of the field and a large number of holes before the end to get caught in. However, most video game versions have the player manipulating the ball directly rather than tilting the field.