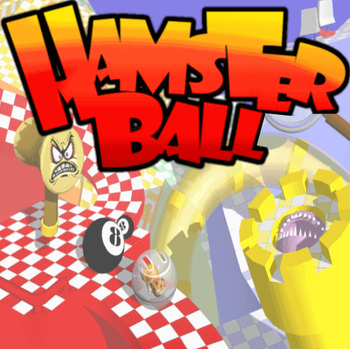 Hamsterball is a Mad Marble Maze made by Raptisoft for PC in 2004. A version for Playstation 3, developed by Creat Studios and published by TikGames, was released in 2010.
Advertisement:

The main game mode is Tournament, where the goal is to race against the clock to the goal of 15 races that get harder and more elaborate as the game goes on. Any time left over is carried on to the next race, so speeding through the early races is essential.

Time Attack challenges you to finish one of the races to get bronze, silver and gold medals, and the Golden Weasel trophy.

Multiplayer modes include 2-player racing on any of the unlocked races and up-to-4 player 'Rodent Rumble' games, where the goal is to knock your opponents of the arena while not falling off yourself.