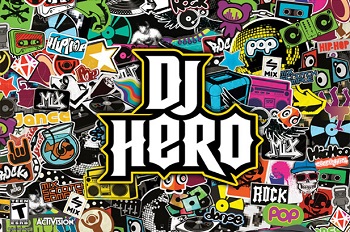 A spin-off of the Guitar Hero series by Activision, developed by FreeStyleGames, DJ Hero is a large variation on the usual instrument-peripheral-rhythm-game-genre, in which instead of a representation of a conventionally popular instrument like a guitar, bass, or drums, you use a turntable peripheral. The difference comes from that while you do press buttons alongside on-screen prompts to interpret a song (albeit with two fewer buttons), some notes require you to hold down the button and "scratch" the turntable. In addition, you also have to adjust your crossfader bar to match the note highways on screen.

The soundtrack of the series consists of remixes/mashups of various songs produced both in-house by the developers, or by the several artists brought into the project, including and not limited to Grandmaster Flash, the late DJ AM, deadmau5, Tiësto, and RZA of Wu-Tang Clan fame.

In February 2011, DJ Hero, alongside its parent series Guitar Hero, has been given the axe by Activision. In 2015, FreeStyleGames had been put to work on Guitar Hero Live, but a third DJ Hero game looks unlikely...