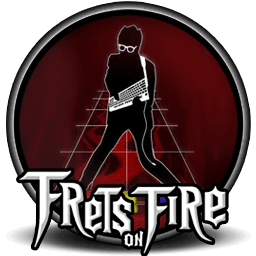 is an open-source music video game, based on Guitar Hero. It was developed by Unreal Voodoo, a Finnish video game company. Though it is possible to play it with a guitar controller (the most common way of playing among the fans), it was designed to be playable holding the keyboard similar to how a guitar is held, reflected in the logo for the game.

The main difference between Guitar Hero and Frets on Fire is the ease of adding custom songs, which is the biggest selling point, so to speak, of the game. There is an editor to chart custom songs, and a large community has sprung up offering charts for many songs, in addition to charts in the Guitar Hero/Rock Band games. There are a few (3) songs included with the game, though nowhere near enough for it to be considered a game on its own — the obvious conclusion is that the game was made for custom songs.

As the game is open source, the modding community is huge as well. FoFix (previously known as Alarian Mod) is one of the most popular, with custom skins recreating the general feel of Rock Band and Guitar Hero, along with adding drum charts and elementary support for vocals. Despite being the smoothest running version of the game, it is not the official version due to copyright and trademark concerns, especially in the U.S.