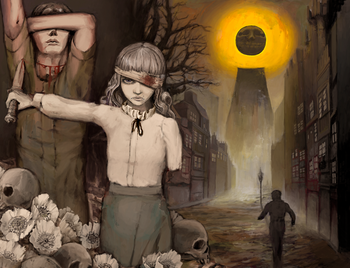 After the Second Great War, 1942.
It's a homecoming.
Advertisement:

A sequel to the Horror RPG Fear & Hunger, this time set in a more modern period of 1942. You don't need prior knowledge of the game to play, but it does help fill in the blanks regarding the lore and canonicity of certain parts from the first game.

Prehevil - 1942, months after the Second Great War. Your character is determined to go there through some quirk of fate, however, the train they're boarding comes to a stop in the middle of nowhere, just before reaching the destination. And there's the matter of this strange dream, and a festival, set up by some mysterious figure.

The full game is not out yet, but there is a very dense demo released here.