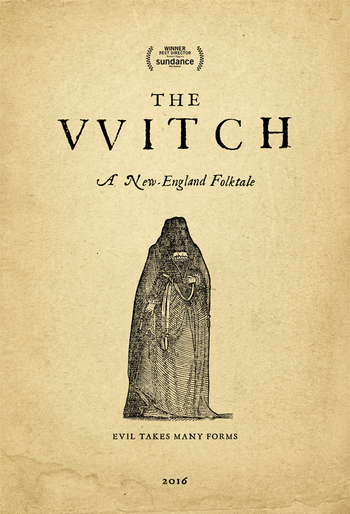 Evil takes many forms.
"Wouldst thou like to live deliciously?"
Advertisement:

The Witch: A New-England Folktale (stylized as The VVitch) is a Religious Horror historical drama film directed by Robert Eggers and starring Anya Taylor-Joy. The movie originally debuted at the 2015 Sundance Film Festival (where it won the Best Director award in the Drama category), and was released to wide audiences on February 19, 2016 by A24.

The Witch is set in 1600s New England, where a Puritan family is banished from their village and must set out on their own into the wilderness. They set up a family farm on the edge of the woods, but encounter an evil lurking beyond the treeline.

Compare with A Ghost Story, another A24 film released the following year, which put a similarly introspective and minimalistic spin on a classic horror trope (ghosts instead of witches).

The Witch provides examples of the following tropes: