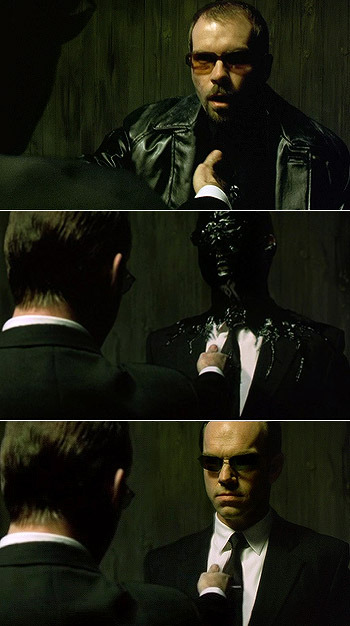 More Smiths will suffice.
Agent Thompson: You!
Agent Smith: Yes, me. [transforms him into a Smith copy] Me, me, me.
Copy Smith: Me too.
— The Matrix Reloaded
Advertisement:

One of the problems with cloning is how slow and inefficient it is; you have all the difficulties of creating life, letting the clone mature, dealing with it diverging from the original, Clone Degeneration and so on. One simple way around this is to start off with some raw materials...namely, another person. This can range from using Functional Magic or Phlebotinum to transform someone physically and mentally or using more mundane means like Magic Plastic Surgery and Brainwashing. Either way, the unfortunate victim becomes the original's Doppelgänger.

Since this basically involves killing the person the clone's "made" from, this trope tends to be the province of villains. Indeed since cloning's become possible in Real Life, (and no longer automatically brings to mind a Mad Scientist), this is a good way for a writer to keep the act of cloning someone as ethically questionable. A villain who makes a habit of it might also be The Virus (especially if the clones are able to transform people as well).

Expect all the usual Cloning Blues to be turned Up to Eleven, since the copy has to deal with a Loss of Identity on two levels; both as a copy of someone else and from losing their original identity (if they can even remember it).

Compare and Contrast; Human Shifting (where someone has the ability to transform into another person), We Will Not Use Stage Makeup In The Future (when this is used where a simple disguise would have sufficed), Body Surf, (where there is always only one of the "surfer", barring accidents), Grand Theft Me (where someone takes over another person's body), The Virus (which transforms the victim into a member of the Virus' type, rather than into a specific individual, although this distinction may be blurred if the Virus has a Hive Mind), Face Stealer (who forcefully transforms themselves into the original rather than the other way around), Self-Constructed Being (where any material can be used as well as focusing on the being in question), and Kill and Replace (where the killer transforms into or impersonates the victim).