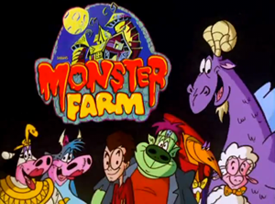 Monster Farm was a short-lived animated series from Saban that aired one season on the Fox Family network (now Freeform) from 1998 to 1999, on an afternoon kids' show block called "The Basement" that included this show alongside Bad Dog, Walter Melon, and reruns of Pee-wee's Playhouse.

The series was about a young man from the city named Jack Haylee and the farm he inherits from his great Uncle Harloff. When he arrives, he finds a bizarre collection of farm animals. Together, this unlikely menagerie must work to help their new owner save their home from the curiosity seekers who threaten their wacky world.