Anime / Mokku of the Oak Tree 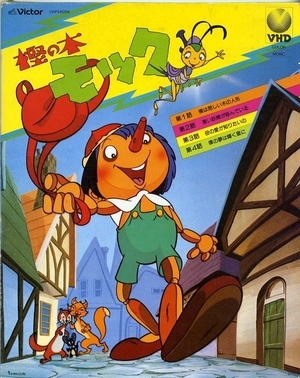 Kashi no Ki Mokku (known as Pinocchio: The Series or Saban's Adventures of Pinocchio in the Western world) is an anime adaptation of the story of Pinocchio, made by Tatsunoko Production. It ran for 52 episodes in 1972 on Fuji Television. The first adaptation into English came in 1984 when Jim Terry of Force Five fame cut several episodes into movie form; this version was distributed by Harmony Gold. Then in 1990, Saban Entertainment adapted the entire series into English, as one of several Tatsunoko shows they dubbed around the same time. This version ran on HBO in 1992, on BBC1 in the UK, and all over the world via Fox Kids.

Unlike the Disney version, this version is far more like Carlo Collodi's original story, which was rather dark. In one infamous episode, Pinocchio tries to kill a boy and take his heart to become human. Pinocchio himself was characterized as being prone to all the flaws of humanity, and he had to learn how to overcome them. It's also a very loose adaptation of Collodi's novel, as Pinocchio has his own share of adventures, none of which are based on the original story.

See also Piccolino no Bouken, a later adaptation of the story.