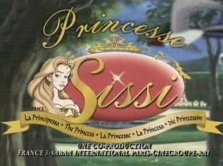 A 1997 French/Canadian animated series created by CinéGroupe and Saban Entertainment subsidiary Saban International Paris, very loosely based on the younger years of Elisabeth of Bavaria.

More specifically, the story focuses on the plucky young farm girl nicknamed Sissi who falls in love with Prince Franz from Austria. The rest of the series tells of the trials and troubles it takes for the two of them to actually get married. There's her future mother-in-law, who's looking for a better girl to marry her son; political tensions, Sissi's own father, and lots of danger and wacky adventures in between.

The show aired in France, Canada, Italy, Germany, Greece, Denmark, Finland, Norway, Sweden, the Netherlands, Poland, Hungary, the United Kingdom and some countries of Latin America (through Discovery Channel in the late 90s). Several DVDs have been released in Germany.

Compare Liberty's Kids, an American series with similar animation and genre, and Elisabeth, a deeply cynical (but possibly more fantastic) musical also based on Elisabeth of Bavaria.