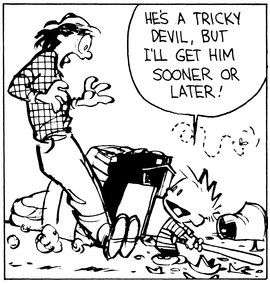 But at what cost?
Advertisement:

Nothing like a nice relaxing day at home. Sitting around, with a book, no distractions, no annoyances, just a nice, quiet-BZZZZZZZZZZZ!

Or not. There's a bug buzzing around your head, making it impossible to relax. Could be just a fly making trouble, but even worse, it could be a mosquito, just waiting to sting you when your back is turned.

The worst part is, it just won't go away, no matter how hard it gets swatted it just won't leave. So, of course, zanier and zanier schemes are required to get rid of it. After all, a baseball bat's big enough, it should be the perfect thing to whack a fly with, right?

Of course, what generally causes the most trouble isn't the bug itself, but the character's increasingly extreme attempts to get rid of it, unless the bug itself is a trickster. Generally, the character will only hurt themselves with their angry attempts to rid themselves of the pest, or, at the worst, end up destroying their perfect afternoon, while the fly gets away scott-free.

This has happened to everyone.note  Well, everyone who is willing to murder flies.