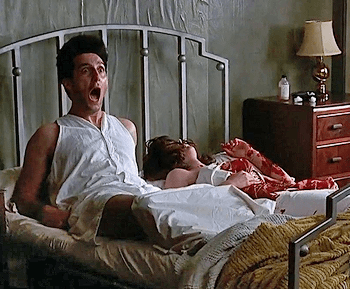 DI Bob Smith is in a bar. He meets Alice Jones, a rather attractive woman. They have a few drinks and a talk. A few more drinks, then a Ugandan discussion.

They finish and Bob falls asleep. He wakes up in the morning — with Alice's blood-covered corpse. He's just become the prime suspect for her murder.

That's one of a number of scenarios. Will Bob be Mistaken for Murderer? Is it an elaborate Frame-Up? What can Bob do to Clear His Name? Often What Did I Do Last Night? is a Driving Question— what if Bob really did kill the victim while he was under the influence? Looks like we have a Whodunnit on our hands, often with the extra twist that Bob himself can be a detective or a cop.

See Death by Sex, Out with a Bang. Compare and contrast The Schlub Pub Seduction Deduction, where it's the man who winds up the victim of a Honey Trap. Also compare You Wake Up in a Room, Bedmate Reveal. Overlaps with Body in a Breadbox, as this is an unlikely place to dispose of a corpse, and The Corpse Stops Here, as whoever is found next to the body will probably be the default suspect.