Literature / To Sail Beyond the Sunset 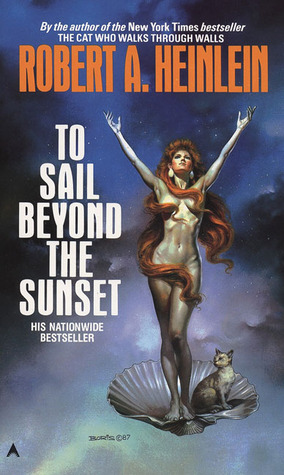 To Sail Beyond the Sunset is the last novel that Robert A. Heinlein wrote and published before his death. Set in The World as Myth established in the previous two novels, the story focuses on a character first introduced in Time Enough for Love: Maureen Johnson Long (aka Maureen Johnson Smith), mother of Heinlein's archprotagonist Lazarus Long.

The setup takes a bit of explanation. In Time Enough for Love, Lazarus traveled in time from the year 4292 to the year 1916 to meet his original family. In so doing, he fell in love with and romanced his own mother. In The Number of the Beast, he used a more advanced Time Travel technology to rescue her from late 20th century Earth and bring her back to his time, whereupon she was rejuvenated with 43rd century technology and joined his extended group marriage. In The Cat Who Walks Through Walls, Lazarus' Time Corps fought a battle throughout the multiverse to rescue the dormant supercomputer Mycroft Holmes from Luna to help them predict the effects of their time manipulations.

This novel has two story threads. It starts with Maureen waking up naked in a hotel room next to a dead man. As the story evolves it turns out that she has been stranded in a previously unidentified Earth timeline after an apparent accident involving a pandimensional transport. She must negotiate the bizarre, yet strangely familiar culture while investigating her situation and surviving long enough to be rescued.

While she does this, she subvocally narrates her memoirs to an implanted recording device, recounting her life from adolescence all the way to her rescue by Lazarus. The result is something of a P.O.V. Sequel to large chunks of Heinlein's "Future History" series, as her presence at various events in the timeline did everything from saving the Howard trust from collapsing in the Great Depression to making a crucial investment in the first manned spaceflight.

After she is finally rescued, she then embarks on the mission she joined the Time Corps to accomplish in the first place: to rescue her father, who disappeared during the Battle of Britain in World War II.