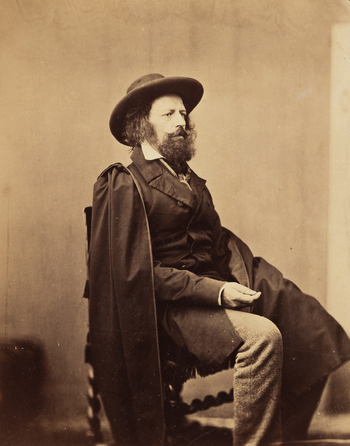 Photograph on 1857 by James Mudd
I hold it true, whate'er befall;
I feel it, when I sorrow most;
'Tis better to have loved and lost
Than never to have loved at all.
—Alfred, Lord Tennyson, In Memoriam A.H.H.
Advertisement:

He was born on 6 August 1809 in Lincolnshire to a George Clayton Tennyson (1778-1831), an Anglican clergyman; and Elizabeth Fytche (1781-1865), the daughter of an Anglican clergyman. Alfred Tennyson grew up introspective and brooding, but was drawn to poetry at an early age, writing The Devil and the Lady, an imitation of Elizabethan tragedy, at the age of 14.

In 1827, Tennyson attended Trinity College, Cambridge. In April 1829, Tennyson met Arthur Henry Hallam, a fellow poet whose friendship was of enormous importance. Hallam brought Tennyson out of his shell and encouraged his poetry; they both entered the Chancellor's Prize Poem Competition (which Tennyson won with his poem Timbuctoo) and joined the Cambridge Apostles, a discussion group in which a member gives a prepared talk on a topic, which is later thrown open for discussion. He even published his collections of poems: Poems, Chiefly Lyrical in 1830 and Poems in 1832. His poems were decried by some critics as overly sentimental, but they proved popular and brought Tennyson to the attention of well-known writers of the day, including Samuel Taylor Coleridge.

On 15 September 1833, Hallam died from a brain haemorrhage, plunging Tennyson into profound grief. Tennyson turned to writing ''In Memoriam A.H.H.'' to come to terms with this loss. At the meantime, he continued to write other poems, and The Princess (1847) enhanced his reputation, and the eventual publication of In Memoriam A.H.H.'', which he took 17 years to write, in 1850 acknowledged him as one of the major voices of poetry in his age.

Tennyson married Emily Sellwood in 1850 and was appointed Poet Laureate later in the same year. In 1853 he settled in the Isle of Wight, and he continued poems like Maud (1855) and Enoch Arden (1864). During that time, Queen Victoria lost her husband Prince Albert on 14 December 1861, and she turned to reading In Memoriam A.H.H., which became a great favourite of hers. Tennyson himself was offered a baronetcy many times before finally accepting ennoblement in 1883. Much of his later career was taken up with finishing his Arthurian epic, Idylls of the King; the first part of it was published in 1842, but the poem was completed in 1874. He even produced a number of stage-plays, like Queen Marry, produced in 1875; and Becket, a play inspired by the martyrdon of St Thomas Becket, produced in 1884.

Alfred, Lord Tennyson died on 6 October 1892. Before dying, he requested that Crossing the Bar, a poem that compares death to crossing the sandbar, at the end of all editions of his poems. He was also the longest serving laureate, having held the laureate from 1850 until his death.

Other tropes in Tennyson's work include: