Literature / The Idylls of the Queen 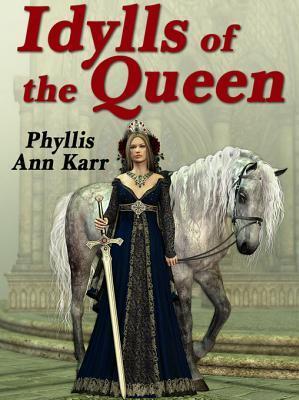 O me, that such a name as Guinevere's,
Which our high Lancelot hath so lifted up,
And been thereby uplifted, should through me,
My violence, and my villainy, come to shame.
— Alfred, Lord Tennyson, Idylls of the King

A retelling of chapters 3-8 in book 18 of Malory's Morte d'Arthur, written by Phyllis Ann Karr and published in 1982, this book is an example of fantasy and crime fiction at the same time. The crime in question is the poisoning of the apples served at the feast prepared by Queen Guinevere, so, obviously, the Queen is the main suspect. The story is told from the perspective of Sir Kay, who, with the help of Mordred and the Lady of the Lake, tries to acquit the Queen of the accusation. During the investigation dark secrets of noble families are brought to light, religious conflicts reappear, Lancelot occurs to be a jerk, and all the courtly ideals are ridiculed.

Every chapter has a direct quotation from Malory at its beginning, and, as a whole, the novel sticks to Malory's version in every detail, including the names of minor knights and ladies and the exact chronology of events (though not the religious position - e.g. in Karr's novel the hermits are crazy old men, very much unlike Malorian majestic and omniscient interpreters of dreams).