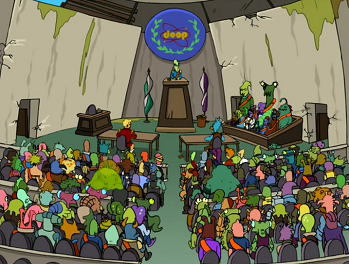 "The Babylon Project was a dream given form. Its goal: to prevent another war by creating a place where humans and aliens could work out their differences peacefully."
— Commander Jeffrey Sinclair, season one opening narration, Babylon 5
Advertisement:

The Fictional United Nations is a formal international diplomatic apparatus that mediates in disputes between nations. Its primary goal is usually to prevent wars, and it sometimes forms out of an Enemy Mine or Fire-Forged Friends situation, as was the case with the real-life United Nations.

The concept is similar to The Alliance but can contain both good and evil members, which provides a story set there with a source of conflict. Also, alliances are often just a treaty or even an informal agreement making nations allies, whereas here there is a formal governing apparatus. However, unlike The Federation, the Fictional United Nations is not treated as a single state: Individual members are still sovereign nations and may take action unilaterally if they feel the need. It also tends to have no military of its own, and operations ordered by its (usually) ruling council are executed by the armies of member states.

This can fall practically anywhere on the scales of Idealism Versus Cynicism and Romanticism Versus Enlightenment. In some portrayals, the Fictional United Nations is hamstrung by applications of Realpolitik and greed, with big, powerful countries essentially free to ignore it without much consequence and run riot over weaker polities. In other cases the author depicts the job of keeping the peace between nations as tricky but not impossible, with the participants more inclined towards Enlightened Self-Interest and willing to work together for the greater good, allowing for Aesops and/or positive moments when peoples of many tribes and creeds come together and do something awesome.