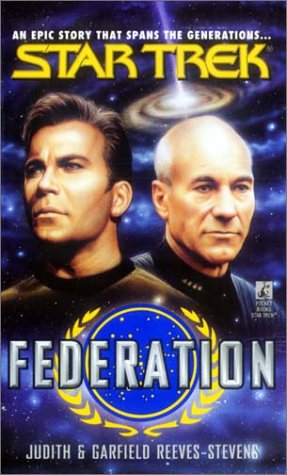 Federation tracks three different timelines. In the 2060s, a fascist movement called Optimum is sweeping across Earth, and a physicist named Zefram Cochrane is caught in the crossfire between Optimum's dragon Colonel Adrik Thorsen and La Résistance.

Meanwhile in 2267, Captain James T. Kirk of the USS Enterprise (NCC-1701) receives a distress signal from Zefram Cochrane, whom he met earlier that year (TOS: "Metamorphosis"

99 years later in 2366, Captain Jean-Luc Picard of the USS Enterprise (NCC-1701D) acquires an apparently Borg artifact from a rogue Romulan ship, containing a computer entity that rapidly takes over the Enterprise.

As the two crews struggle to fulfill their missions, destiny draws them closer together until past and future merge — and the fate of each of the two legendary starships rest in the hands of the other vessel...note source: book blurb

If you're looking for the trope, see The Federation.