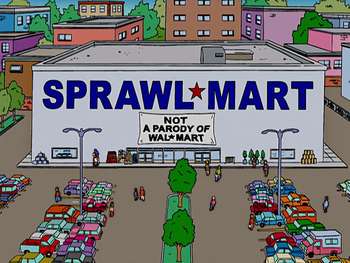 We are most definitely not affiliated with Wal-Mart.
Peter: Hey, if we pass a McDaniel's or a Burger Queen, let's hop out!
Quagmire: Oh, that's right, we're on television.
Joe: Oh, I'd love a flame-broiled Bopper!
Quagmire: (sighs) So frustrating. We all know what we're talking about.
Advertisement:

When a real-life institution is to be featured prominently in a series, it will be replaced by a fictional stand-in. This is done in part to avoid licensing issues, but also to avoid the problems inherent in twisting the institution to fit the specific needs of the show.

While this gives the writers the liberty to make necessary changes to the real-life institution, it does run the risk of giving the viewers an unintentional laugh. (Or occasionally an intentional one, as when the fictional version is used to provide a Take That! to the real-world counterpart). Also, the authors can easily forget that they already introduced a fictional counterpart to something, and end up creating another one, or even including the real one.